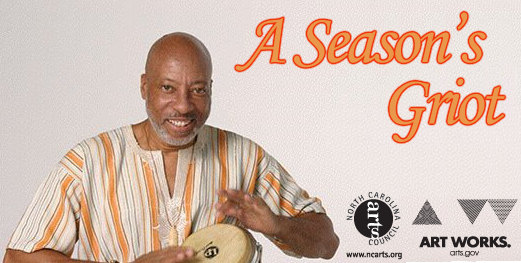 I am very proud and honored that My Great-Grandmother’s Gourd was featured on A Season’s Griot, a one-hour storytelling show honoring the African-American holiday of Kwanzaa, focusing on the theme of families, fatherhood and community, and aired on WHQR 91.3 FM. Thank you Madafo Lloyd Wilson for choosing my book, and thank you Joyce Grear for a beautiful reading.

Excerpt from the article “Only Kwanzaa public radio program in the U.S. continues its tradition after 20 years” by Amanda Greene on December 26, 2013:

It was mid-October, but the two storytellers were planning for Kwanzaa in late December.

Wilmington storyteller Joyce Grear (http://joycegrear.com/) and Madafo Lloyd Wilson (http://www.madafo.com/), longtime storyteller and host of “A Season’s Griot,” (http://whqr.org/post/seasons-griot-2013) were dickering over which story she should read this year. They sat in the wide, barren conference room between radio studios at WHQR Public Radio where “A Season’s Griot” has been produced for more than two decades as the only nationally syndicated Kwanzaa radio show in the country. 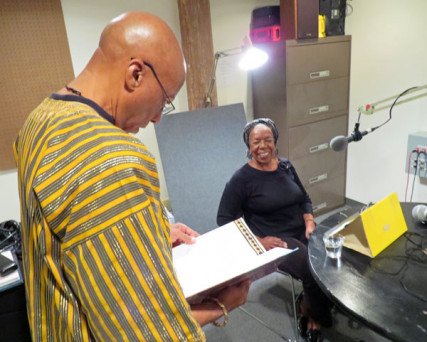 Storytellers Madafo Lloyd Wilson and Joyce Grear prepare to record a story for “A Season’s Griot,” a Kwanzaa program on Public Radio International.

One was a Japanese tale; the other was a version of an Aesop’s fable about the baobab tree. The baobab tree won.

“Ahh, this is great,” Wilson said after finishing his reading, tapping the book with his finger. “This is the story.”

“How did you come to that,” Grear asked.

“The tree, the image of the tree, the little girl helping the elder,” he said. “This is what the show’s about.”

This year’s one-hour storytelling show honoring the African-American holiday Kwanzaa features the theme of fatherhood and airs on WHQR 91.3 FM at noon Thursday (Dec. 26) on the first day of Kwanzaa and will re-air at 7 p.m. Dec. 29 on WHQR. Kwanzaa is celebrated from Thursday (Dec. 26)- Jan. 1.